This conference is sponsored by the Religious Studies Department in partnership with other university bodies including the Boardman Fund and the South Asia Center, and will be held at Perry World House.  It brings together an outstanding group of scholars to discuss a range of pressing and timely questions concerning the intersection of race and religion as they relate to rights in the modern United States. Please contact the Department of Religious Studies if you need any further information.

Sponsored by the Boardman Fund, the Department of Religious Studies, and the South Asia Center

“The Rebel and the Imam in Early Islam: A Reconsideration of Islamic Historiography” – Najam Haider (Barnard College) 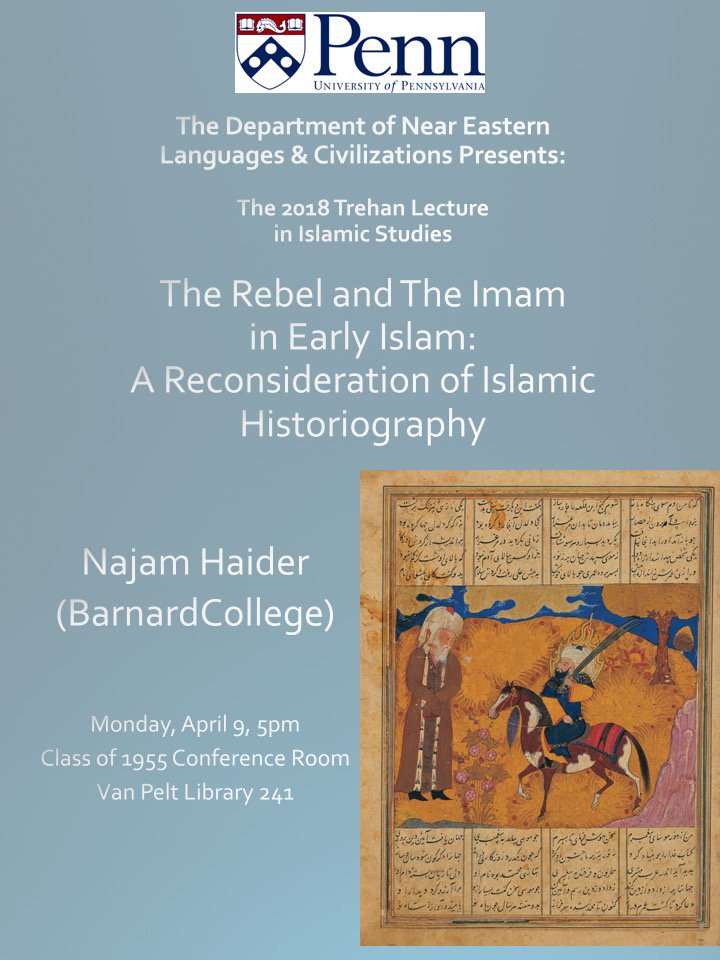 Sponsored by the Boardman Fund, the Department of Religious Studies, and the South Asia Center.

Long before the age of twentieth-century geopolitics, the American and Muslim worlds informed, interacted, perplexed, inspired, confounded, and imagined each other in ways far more numerous than is frequently thought. Whether through the sale of American commodities in Central Asia, Ottoman consuls in Washington, orientalist themes in American fiction, the uprisings of enslaved Muslims in Brazil, or the travels of American missionaries to the Middle East there was no shortage of opportunities for Muslims and the inhabitants of the Americas to meet, interact, and shape one another from an early period.

The opening keynote by Denise Spellberg will take place at the Perry World House. Friday’s panels will be held at the Kislak Center for Special Collections, Rare Books and Manuscripts, and the final day’s panels on research in progress will be held at the McNeil Center for Early American Studies. The program will close with a keynote by Sylviane Diouf, award-winning historian of the African diaspora, and author of Servants of Allah: African Muslims Enslaved in the Americas.

Conference presented by the McNeil Center for Early American Studies and the Penn Libraries, co-sponsored by the Penn Humanities Forum, Perry World House, the Middle East Center at Penn, the department of Near Eastern Languages & Civilizations, and the Asian American Studies Program.

The Real in Islam: Histories of Physicality and Spirituality from South Asia and Beyond